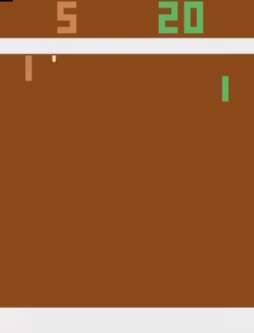 The first part of my week was spent working on the 2nd homework for CS294, Policy Gradients[1]. Source code: https://github.com/hollygrimm/cs294-homework/tree/master/hw2

The Policy Gradients algorithm determines the optimal policy using a parameterized Neural Network (NN) instead of a value function or action function.

For training, a simple neural network with one fully connected layer of 32 units with a ReLU activation was created.

Reward-to-go, the more state/action-centric method, calculates discounted rewards starting at time step t to the end of the trajectory:

The second method, the trajectory-centric method, calculates discounted rewards for the entire trajectory and uses that value for all the timesteps:

Although the neural network for both the discrete and the continuous policy networks were the same, the outputs were handled differently. In the discrete case, logits were returned. From the logits, a single action was then sampled from a multinomial distribution.

The continuous case considered the output of the NN as the mean of a distribution and with the addition of a second trainable variable, the log of the standard deviation (logstd), the actions could be sampled from a normal distribution.

The discrete policy network used sparse_softmax_cross_entropy_with_logits to compute the log probability between the logits and the actions that were actually taken during the trajectory.

The continuous policy network created a Multivariate Normal Distribution using the mean and scaled by the logstd. The actions taken during the trajectory were then passed into the log probability density/mass function.

The resulting log probability is then multiplied by the advantages and reduced by the mean to calculate the loss.

The Adam Optimizer was used for training with a learning rate of .005.

For CartPole, the average return reached close to 200 after about 60 iterations with a large batch size of 5000.  The runs done without normalizing advantages (dna) did slightly better than the ones with normalized advantages (na). Reward-to-go (rtg) converged faster than the no-rtg training. 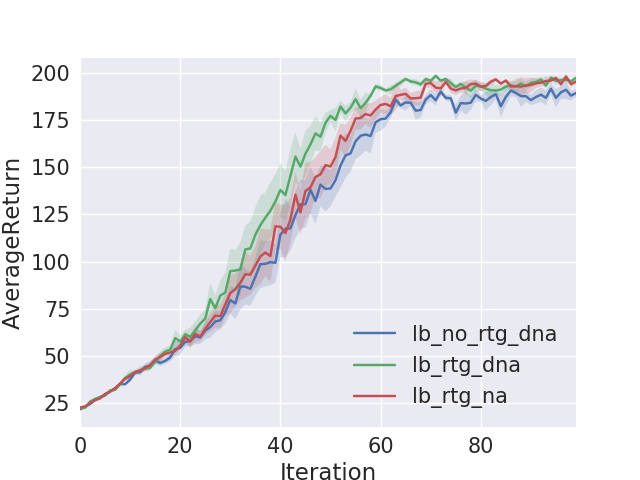 Here is a video of CartPole, trained large batch, reward-to-go, and without normalizing advantages: 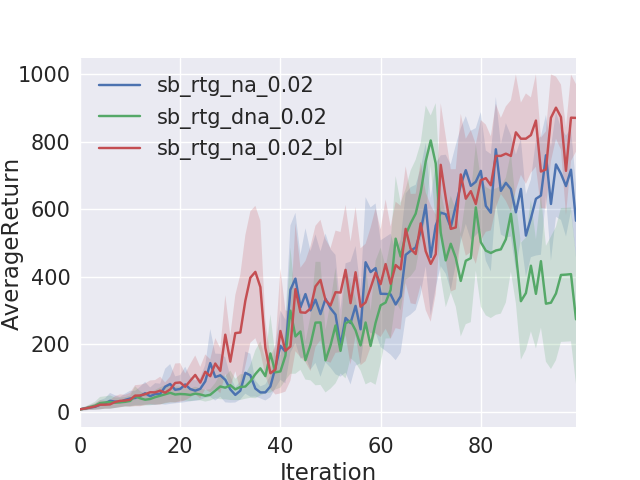 Inverted Pendulum did better with small batches of 1000 episodes and by changing the learning rate from the default of .005 to .02. The best results came from reward-to-go, normalized advantages, and a baseline computation.

After completing the homework, I thought I would apply the same algorithm to OpenAI’s implementation of Atari 2600 Pong. Andrej Karpathy has written a blog post on how he used the Policy Gradients algorithm to learn how to play Pong [3] [4].  His implementation had computations that were entirely Numpy-based [5]. My version used Tensorflow.

Training for two days on an AWS EC2 p2.xlarge instance resulted in the following rewards. The first chart is the first 300 epochs: 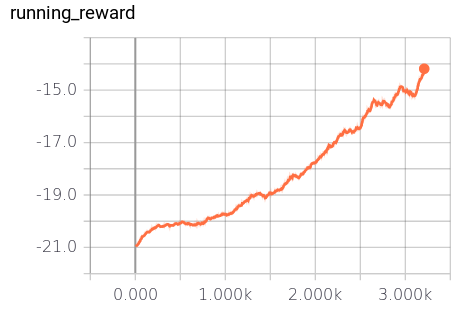 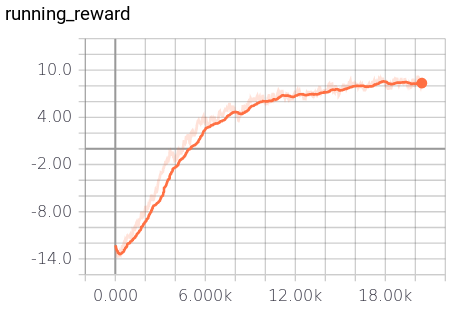 The orange paddle is the hard-coded AI opponent. The green is the agent trained using policy gradients. When the ball goes past the opponent, a reward of +1 is obtained, and if the ball goes past the agent it results in a reward of -1.  A score of -21 happens when the opponent wins every game in an episode, +21 is the result when the trained agent wins all the games. Average human performance is -3 [6], and super human performance is considered +5. My training maxed out with an average reward of +8.

The network is one fully connected layer of 200 units with a ReLU activation. One frame from the Pong Env looks like this: 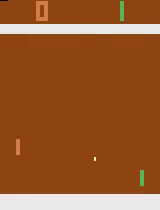 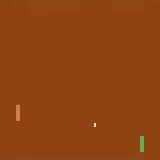 The frame is first cropped to only the playing area (160x160). Then the frame is resized by half (80x80). Finally, the background is set to black, and the ball and paddles are set to white. The pixels are flattened into a (6400 x 1) line of pixels. The previous frame is then subtracted from this frame to train the network on motion between two frames. This difference frame is what is input to the network.

I trained the network to have three output actions: NO-OP (No Operation), UP, and DOWN.  The environment has a certain amount of jitter built in, where a requested action is repeated between 2 to 4 frames [7]. I thought by adding NO-OP, that the agent could pause in a location if needed.

Here is an example game after training reward-to-go, normalizing advantages, gamma as .99, batch size as 10, and learning rate .001, for 2,300 epochs. The agent received an average reward of +8:

When installing the OpenAI Gym environment for Atari on an EC2 instance, when running either:

I had the following error:

The AWS instance had all the required packages installed, such as cmake and zlib1g-dev, but was still unable to find the zlib.h file. I found this issue: https://github.com/openai/atari-py/issues/24  which shed light on the problem. The default ubuntu user on an EC2 instance can't find the zlib.h file due to permissions. Running the command as root worked:

As a workaround, I had to set up my OpenAI Gym Atari environment as root.