The first part of this week was spent working on homework 3 for CS294 "Using Q-Learning with convolutional neural networks" [4] for playing Atari games, also known as Deep Q Networks (DQN). (Source on GitHub)

Like last week, training was done on Atari Pong. I was able to improve my +6 score using Policy Gradients to receive a +20 reward after 5 million games with DQN:

If the Q network is trained on sequential states, the data from timestep to timestep will be strongly correlated and the network would tend to overfit to local regions.

To address this issue, the Q network can be trained on a replay buffer. As the agent is interacting with the environment, the data is being stored in the buffer. Actions are selected using the epsilon-greedy policy with a linear schedule across 1,000,000 timesteps from 1.0 to 0.1.

For computing loss, Huber Loss is used instead of squared error where dealing with very large gradients. With Huber Loss, slope becomes constant as you move away from zero. As a result, it penalizes the network less for making large mistakes and focuses on smaller errors more.

Sonic the Hedgehog Trained with Rainbow

The second part of my week was spent working on training "Sonic the Hedgehog" using the Rainbow Algorithm [5]. As a framework, I used Alex Nichol's project anyrl-py [6] [7].

I trained (Source on GitHub) for seven million timesteps. Below is the reward for each game played; the reward scores maxed out at 2100: 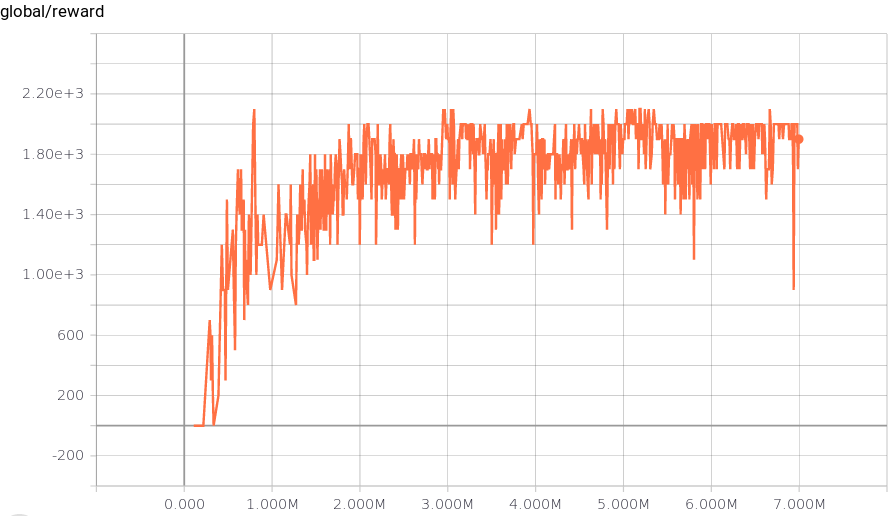 This is the agent with mostly random actions at the beginning of training:

This agent has learned how to quickly get through the beginning of the game, but struggles in the water:

Replaying all transitions from the replay buffer with equal probability is wasteful. It's better to prioritize the data sampled from the buffer using the absolute Bellman error where the predicted reward diverges greatly from the expected reward. In addition, more recent transitions have a higher priority. [8]

The estimated Q values from the Neural Network are often overestimated. When you calculate the target value, it's based on the highest valued action for a state. Updating the Q network with these values will keep amplifying the Q values.

The advantage value is the difference between the Q(s, a) value and the state value V(s). For an action it's measuring how much worse an action is in comparison to the best action in a state.

Add noise to network parameters for better exploration [11] and [12]

Takes a single output reward value and replaces it with a distribution of rewards across N values. For the paper, they used 51 bins and called the algorithm C51. [13]